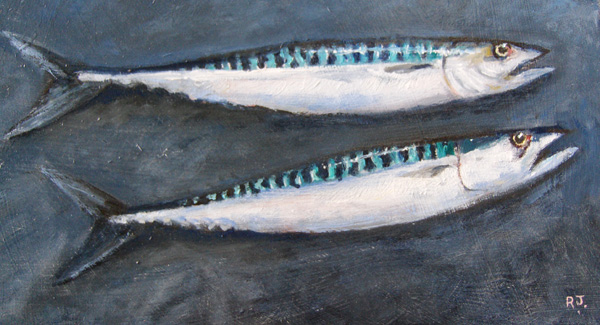 Fish depicted in art are are a tricky subject, how many of you can respond favourably to an image of a dead fish on a plate? I would guess not many! Robert Jones fish paintings manage to escape this terrible fate.
I have written many times of Robert's close association with the sea and how this closeness offers him an opportunity that many artists who use the sea as a theme don't always have. His sea paintings posses an insiders knowledge of it's mood and it's movement, and from my own long association working with it I know his paintings contain an honesty which few sea painters are able to depict.

But let's here stand aside from those paintings and reflect on Robert's paintings of fish which in my view are so often overlooked.They really are terrific, his fish are alive, swimming, fast moving and far from dead! I have chosen here a painting of two Mackerel but if you look elswehere on our website you will find images of Plaice (Flounders in the USA) Pilchards, Bass as well as Lobsters and Crabs. Robert's fish paintings are very spontanious and he has said many times that he has to be in the right mood to paint them or they don't work. They are nearly always painted on scraps of board which are plundered off cuts found in his studio.

These paintings are rich, colourful and highly of textured with layers of paint, they are keenly observed by the artist and since Robert was once a fisherman I guess they should be! They also provoke in me a sense of nostalgia for my childhood growing up amongst the fishing community at Dungeness on the Kent coast. I too am very familiar with most of the fish depicted in these paintings and they are absolutely spot on.

16, The Strand | Newlyn
Cornwall | TR18 5HH | United Kingdom | phone +44 01736 447073
For more information please contact:
Email: paulcopson@yahoo.co.uk
Due to the seasonal nature of the business, contact by email is prefered.