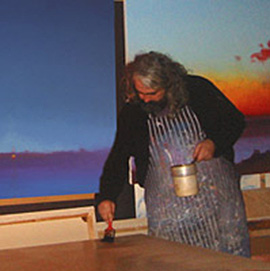 Tom Rickman in his studio

Tom Rickman was born in London in 1960 and studied for his Fine Art Diploma at Epsom school from 1979-1982. Tom's paintings have been exhibited extensively since 1982 throughout the United Kingdom and the USA. He has exhibited his paintings with Thomas Henry Fine Art since 1999 with solo shows in both London and Nantucket Island.

"For some time now I have been interested in the minimal qualities of the sea and sky, using the horizon as the focal point of the picture. These paintings take as their subject the specific time or moment of twilight. At the end of the day there is a progression of movements where twilight colour is compressed above the horizon as it moves towards night. This resonant, sometimes sublime time, marks a poignant moment of day“